23. November 2011
-
Unkategorisiert
-
2 Comments
We finally got around to cleaning out the attic two weeks ago, and besides sorting through and throwing out a lot of stuff – or giving it to a charity -, I came across some cool, fascinating, funny, interesting and strange things.
One very interesting thing I found in a wooden trunk full of old books and LP records. I have no idea how it ended up in there, especially since no-one in my husband’s family has or had any affinity for foreign languages, plus the name in the cover is not a relative. But however it found its way onto this attic in the wilderness of the Franconian Switzerland, I am very excited that it did! 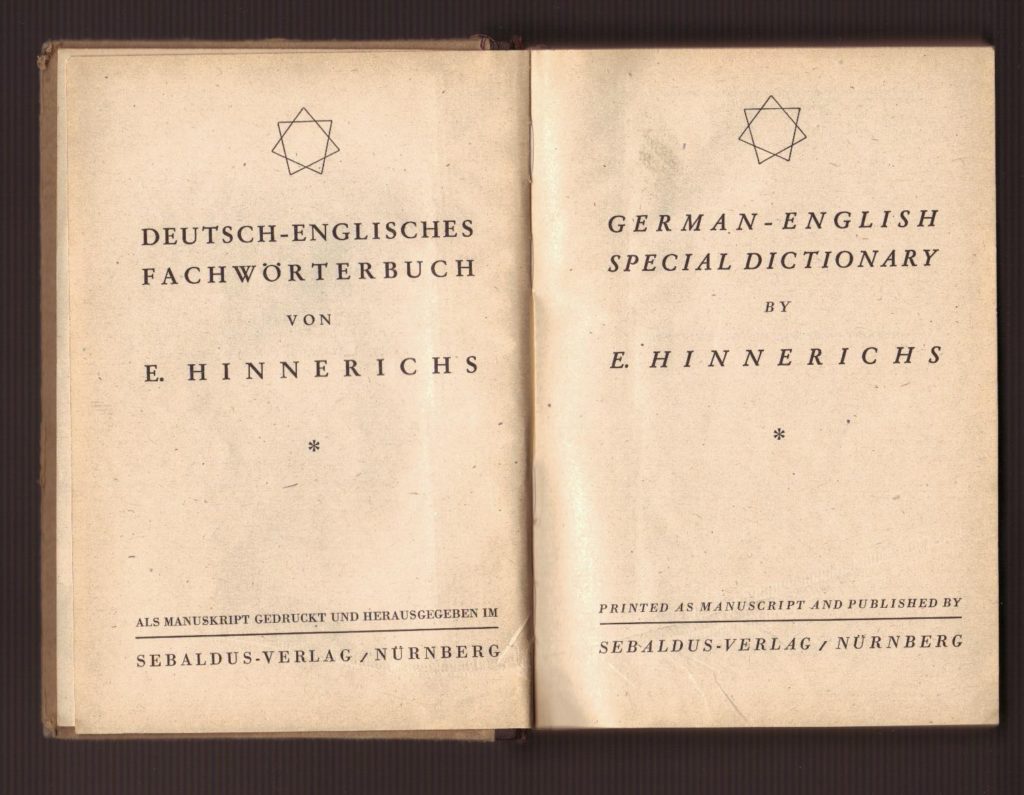 Printed in 1946 by Sebaldus-Verlag Nürnberg, number of copies printed unknown, although there are some to be had via Amazon and antiquarian bookshops, and not very expensive at that.

The preface explains what it is and why it was published:

This book, “printed as
manuscript”, contains a collection (about 25,000 key words) of personal notes
jotted down by an interpreter and translator in the course of his everyday
practice. It was not originally intended for publication, but, as it will be some
time before any of the well-known dictionaries can be re-issued, I decided to
give way to the numerous requests for having this book printed as it
stands.
The
expressions given in this book cover principally administration, legal practice,
food and agriculture, trade and industries, and the engineering, botanical,
chemical, anatomical and pharmaceutical professions, as well as the names of
drugs, etc. To some key-words, such as for instance, “Aräometer”, “Calorien”, “Hormone”,
“Penicillin”, “Streptomycin”, “Vitamine”, explanations have been added, which far
exceed the usual practice in dictionaries, giving this book more the character
of an encyclopedia. Furthermore, a number of charts and conversion tables for
weights, measures, etc., have been included. So as not to disturb the clear
arrangement and alphabetical order of the book, such explanations of key-words
are separately boxed.
Something
quite new is the collection of abbreviations coined during the Nazi-regime, such
as “Reichsschrifttumskammer”, “NS-Hago”, etc., which,
as far as is known, have not been included before in any dictionary and which
are often difficult to translate into the Anglo-American
language.
I wish to
express my appreciation to the American officers and officials, especially to Major Krotcher, Capt. Kinard, 1st Lt. Thacker and Tec.Sgt. Much,
who sacrificed their time in clearing
up some expressions, also to Mr. Speier of the MAN, Nürnberg, who
contributed a long list of technical expressions, as well as to the
publishers and the C.H. Beck’sche Buchdruckerei at Nördlingen,
who co-operated splendidly to ensure a very nice make-up of the book, in spite of
the untold difficulties that had to be overcome in obtaining materials, etc.,
and, finally, to Mr. R. Küger,
lecturer at Nördlingen, who devoted his costly time in giving expert advice to
improve the book. I take this opportunity to thank
very sincerely also the many unnamed contributors to this dictionary.
Suggestions regarding improvements or additions will be gratefully
accepted. I hope the book may be of help, if only in a small way, to American
officers, officials and the new
German authorities.
Nürnberg, August 1945
E. Hinnerichs

I find it remarkable that this project was tackled already in the summer of 1945, just a few months after WWII had officially ended!

I have no idea how and in what context this might come in handy, but I will certainly treasure it, if only for historical reasons!