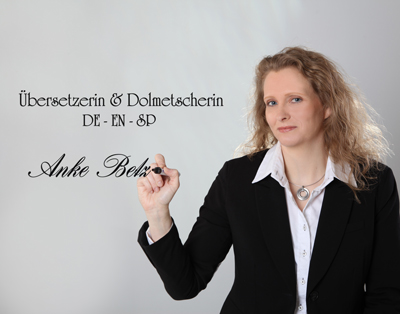 If you have never had anything to do with interpreting, you may not know that there are actually different types of interpretation.

The one known best is probably simultaneous interpreting. Here, the spoken word is rendered in the corresponding (foreign) language, usually using appropriate technology, almost at the same time, i.e. simultaneously, which has obvious time advantages, but is also the most difficult type of interpretation.

A variation of this method is the so-called chuchotage or whispered interpretation, which works without technology: the interpreter stands or sits directly behind the person for whom he or she is interpreting, and renders the spoken word quietly and with minimal time displacement.

As state-certified interpreter, publicly appointed and sworn-in at the German courts and conference interpreter VKD-Junior, I gladly interpret for you your conferences, meetings, seminars, negotiations (also over the telephone), visits to authorities, or other business or private events in the following language combinations:

With Nuremberg as my professional address, I am available throughout the entire Metropolitan Area, but of course also beyond.

Since planning an interpretation assignment requires a very individual project execution, I would ask you to get in contact with me as early as possible, so that the specific preparations and the organization of any technical equipment necessary is possible ahead of time.

You can reach me here